Hi all,
How are you all doing? Now that I’m on maternity leave I have a bit more time to blog 🙂 Today I wanted to share my everyday make up products 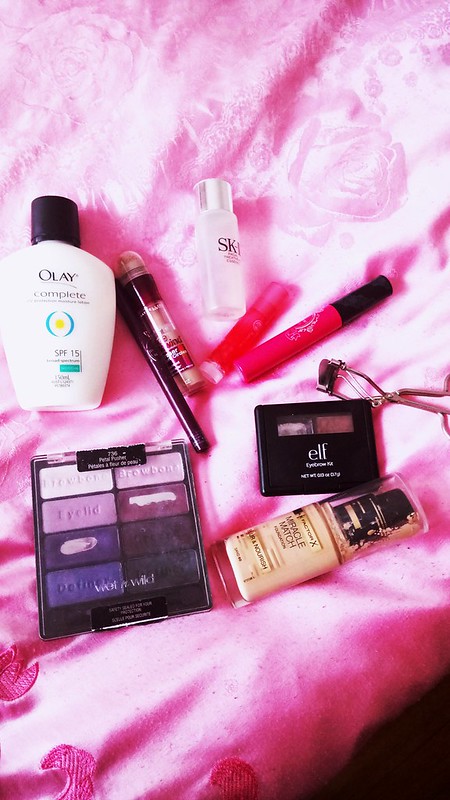 First I would normally use a toner which is not featured above to clean my face and get all that last dirt off my face. Then I would use my Sk2 lotion to pat into my skin followed by Olay complete for sensitive skin moisturing lotion. I have been using this one for years and really love how it absorbs into the skin and doesn’t feel oily or leave my skin dry.

My Go-to foundation at the moment is Max factor miracle match blur and nourish foundation in medium followed by my Maybelline age rewind concealer in medium. I love this concealer and have repurchased this product many times as I can’t find anything else that does the job of hiding undereye bags and other imperfections.

I also use a lip balm and this one is from Japan. For my eyebrows I didn’t used to fill them in but eyebrows definitely define a face so I have been using this Elf duo one and the cream one actually does a good job and blends into my brows nicely but I think I will have to try some other ones to see what else is out there.

For my eyes I use this Wet n Wild palette in Petal pusher – ever since I bought it in the states it has been my go to look the ones that have hit pan you can see are my go to colors one is a mauve kind of color and then I smoke it out with the darker purple. I use the kiss me eyeliner from Japan – they have the best eyeliners – they are waterproof and they glide on nicely and then I finish with curling my eyes with the Heroine masacara that is also waterproof. I have been using both of these products for years and if anyone goes back to Japan I try and get them to repurchase them for me 🙂

So that’s about it – sometimes I will whack some blush on but I hardly contour or highlight my face. Especially with my pregnancy coming to an end I tend to stay indoors for most of my week and only put on makeup when I’m heading out.

Hope you are all having a great week. Let me know any holy grail products I should try 🙂

At our drugstore in Australia – Priceline there was a 40% sale on all cosmetics. There was a tonne of people there and I managed to pick up this Essence eyeliner for about $2.50 and this Maybelline Babylips in Berry for $2.40.

The color payoff for the Berry lips is quite good. It’s like a tinted color balm for the lips and the Essence eyeliner is surprisingly quite good as well.

Here is a definition from wikipedia.
“BB cream, also known as Blemish Balm, Blemish Base or Beblesh Balm, is a cosmetic item sold mainly in East and Southeast Asia. Originally formulated in South Korea it was initially used by dermatologists to help laser surgery patients protect, soothe and refine highly sensitive skin while providing light coverage for post-laser scars, acne and other blemishes.

BB creams come in a variety of different formulations and qualities. Some are said to have skin whitening or brightening properties. Others are said to be anti-acne or anti-wrinkle, some are intended to even out skin tone, and yet others to lighten blemish scars. BB creams are sometimes used like a primer under foundation, and if tinted may supposedly replace foundation and some newer ones are advertised as having functions of primer, foundation, moisturizer, sun block, pore minimization and skin refining together, making them an economic skin care solution.

In recent years BB cream has gained a noticeable following for its skin-regenerating functions and is now also widely used in Asia to supposedly provide natural-looking skin coverage. It has been named “the secret of Korean actresses”, which gained it large exposure in Asian markets.”

So here is what this BB cream claims it will do:

I find the product to be moisturising and did give a healthy glow but just alone it didn’t do well for coverage. So I would use this under my foundation. The shade I got was in medium. Those with fairer skin should go for the lighter version.

Let me know if you get to try this product out for yourselves 🙂 Have you tried other BB creams?

Disclaimer: I got this item as a sample, all opinions are my own.

Okay so I must say that I love shopping in LA or just the US in general! We are sooo getting ripped off here in Aus! All the cosmetics are sooo much more cheaper in the US plus there is so much more variety!
I also got some cosmetics from Taiwan because they have Japanese brands and I love the Japanese line of cosmetics as I think they are better catered for asians.

$4 I have always wanted to try this ever since I saw it. I love the packaging ( I’m a sucker for packaging)

Nailpolishes – Crackle sally hansen $8 (some were buy one get one free or 50% off) Gotta love CVS So I got it in black, white and silver. The silver doesn’t crack as well
Sally hansen – Blue metallic and pale green

I got Konad plates! I have always wanted to buy this but didn’t want to pay for shipping so when I saw them in the mall I knew I had to get the basic one and I absolutely love them! $30 – dunno if I got ripped off but they last forever! or for a very long time

Kiss mascara
Fairy drops mascara – been wanting to try this out since I saw Jen frmheadtotoe use this. So once I get it opened I will definitely let you know if its good.

Fake eyelashes and a couple of bits and pieces!

I just love beauty products!! When has been your last haul and what did you get?